Diego Armando Maradona, born in Lanús Argentina but raised in Villa Fiorito, a shantytown on the southern outskirts of Buenos Aires. He's talent was soon spotted by Argentinos Juniors where he started playing at age 10. He made his debut for the first team at age 15. He played 5 years for Argentinos after he went to Boca Juniors in 1981. In his first full season with Boca he already won the Primera División, he's impressive dribbles and goals had not been unnoticed. 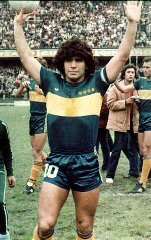 Maradona earned a transfer to European top club FC Barcelona were he would stay 2 seasons and score 38 goals in 58 matches. His last match for Barcelona was in the final of the Copa del Rey in 1984 against Athletic Bilbao. Maradona had just been recovered from an injury caused by a terrible tackle by one of Biblao's players. In the final Maradona gets tackled again, this time he gets angry and kicks a Bilbao player causing a fight to start. Barcelona losses the match with 1-0 and Maradona leaves Camp Nou, signing a contract with Napoli. It is at Napoli where he will have the best period of his career, winning Napoli's first Italian Championship in 1987 and repeating it in 1990. In 1989 Napoli wins the UEFA Cup by beating VfB Stuttgart in the final with 2-1, Maradona scoring one of the goals. 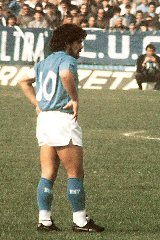 However the most brilliant part of his career was at the 1986 FIFA World Cup where he wins the tournament with Argentina. The most famous match of the tournament being the quarterfinal against England (2-1). It is in this match where Maradona scores twice, the first goal being a handball of which he would later say it was "The hand of god". His second after an amazing dribble in which he passes 5 England defenders and goalkeeper Shilton. Maradona would later say in one of his interviews "In that game no one could have stopped me, not even Mike Tyson". Maradona continued to play well that tournament by scoring two amazing goals against Belgium (2-0) in the semifinals and winning the final against West Germany with 3-2. Maradona had a great influence in the Argentinian victory by scoring 5 goals and making 5 assists. He won the Golden Ball for best player of the tournament. 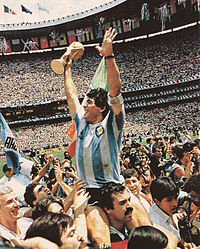 After the 1990 FIFA World Cup in which Argentina lost the final with 3-2 against West Germany, Maradona failed for a drugs test for cocaine and was banned for 15 months. He left Napoli in 1992 to play for Sevilla. In 1993 he left Sevilla and went to Newell's Old Boys where he would play 5 matches. At the 1994 FIFA World Cup Maradona was back for a moment by scoring a goal against Greece in the group stage. After that match Maradona was sent home for failing a drug test.

In 1995 Maradona returned to Boca Juniors for the last 2 years of his career. He was one of the greatest players ever, without a doubt the best dribbler ever, a great free kick taker and a brilliant passer.