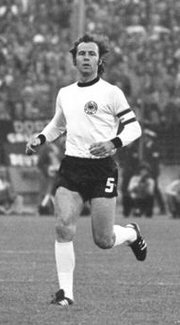 Franz Beckenbauer, nicknamed "Der Kaiser" was a German football player. He won the European Cup with Bayern Munich three times in a row from 1974 to 1977. As a captain he helped West Germany win the World Cup in 1974. In the final he had to mark Johan Cruyff and did this so well that Cruyff was never able to play like he had done before at that tournament. West Germany won the final with 2-1. Beckenbauer introduced a new style of play as an attacking sweeper. He would often make a rush from his own penalty area to the penalty area of the opponent by dribbling and making short combinations with his teammates. He did this so well that he scored 60 goals for Bayern Munich as a defender.